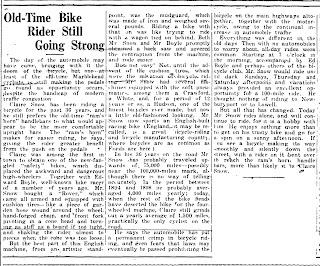 Friends have asked, "How long have you been riding?"... ¯\_(ツ)_/¯  I guess technically 55 years? I had a red Radio Flyer tricycle I rode down a cement walkway and over a few stairs when I was three or four. I actually remember it. Lol. The next bike after that was pink with a banana seat and streamers on the handlebar ends. The seat had silver glitter.
The first "long" ride I took was on an orange Huffy ten-speed given to me by my second-dad Bill. I rode that bike from Swampscott to Marblehead when I was 13 -- ten miles round trip -- to catch the matinee of Star Wars at the Warwick movie theatre. It was a long ride for teenage me.
I'm not sure what the catalyst was towards becoming an endurance cyclist. In 1991, I was given a Bianchi Volpe 21 speed bike, and I just started riding. Then in 1993, I decided to do something a little different. I left my job, gave up my apartment, sold many of my belongings, purchased some bikepacking gear, and headed to Italy. I had no real plan other than to travel around Italy by bike, find a job and live in Italy forever; and despite a few mishaps and falling short of my vision, it was an ADVENTURE in all caps.
From there, my cycling endeavors snowballed into hundreds of thousands of miles; another long bikepacking trip; years of events, races, charity rides, training plans, bikes, coaches, sponsors, and teams. Thirty years of cycling. I've pared back the last few years -- the pandemic combined with injuries has been a drain -- but I still love the bike.
I have no clue where my love for cycling came from -- No one else in my family rides --  but I came across this article recently, (photo above), written in 1928, about my great-great uncle, Clarence Snow. My aunt remembers Clare as an exceptionally athletic man, well known for cycling and swimming. He would have been 62 when this article was written -- still going strong -- and I think that's pretty cool.
Three cheers to Uncle Clare!