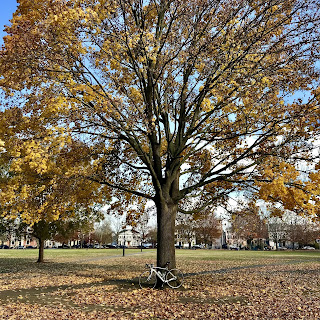 The difference of a day -- it was 45 degrees yesterday, near 70 today! Coffeeneuring ride 6 was an architectural field trip through Salem, with a stop at Jaho Coffee and Tea.
I've been reading a fascinating book on Salem's maritime fortunes titled, Death of an Empire, by Robert Booth. Midway into the book, currently the year 1819, I decided to swing by a few of the homes mentioned in the narrative. I've driven by, rode by, and lived in the general vicinity of many of the homes mentioned in the book without ever really knowing their history. Crazy! I stopped by several of the Federalist style buildings in the Washington Square and Derby Street area, and will revisit others soon!
I planned to stop at a new coffee shop on Derby Street, but after discovering it closed, ended up at Jaho Coffee and Tea where I was grossly overcharged but not willing to cause an issue over it. I just won't go back there again. It was the second time I've had an unpleasant experience at Jaho, and with so many cafes in Salem, there's no reason for me to return.

It was a great day for an architectural field trip! More to come at a later date.