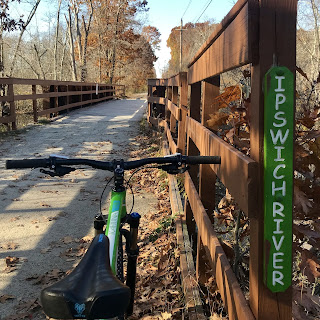 Wow. Another amazzzing day. I headed out for a trail ride in 70 degree temps, marveling at the incredible weather we've had. I know the downside is the negative effects of our warming planet, evident in the coastal erosion I witnessed last week in Salem, but it's hard not to enjoy the sunshiney days of a mild autumn.

I headed to Danvers and the Wenham rail trail, taking a sidetrack route to ride along the Wenham Canal. There were dozens of cyclists, runners, and walkers out on the roads and on the trails, enjoying the spectacular weather. It felt like summer, looked like fall, while on the precipice of winter. 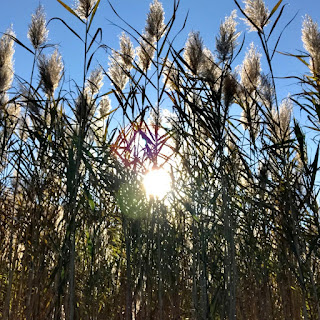 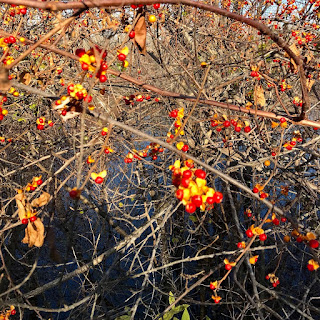 I hadn't planned on coffeeneuring today, but midway through my ride I wanted that caffeine fix. I knew of only two places in the general vicinity that might work as a destination -- one being in Topsfield and one a little (a lot*) further in Boxford. -- (*a little on a road bike, *a lot on a mountain bike).
Not having been to Topsfield in a while, I was sad to discover the Daybreak Cafe was gone and replaced with a new place called the Bagel Bin Deli. There were two tables of cyclists sitting outside, so I decided to stop and say hello and grab a coffee. Inside it was evident the pandemic has affected the business, with only three or four empty tables indoors and a shelving unit holding takeout orders. The menu ordering system was through a QR code.
I ordered an iced coffee and sat outside, taking a small break before heading back down the trail. It was a glorious day to be outside! I'm not sure my coffee break falls under the spirit of coffeeneuring, so I'll only count it in my seven if I'm coming up short. Otherwise it will become my C+1. 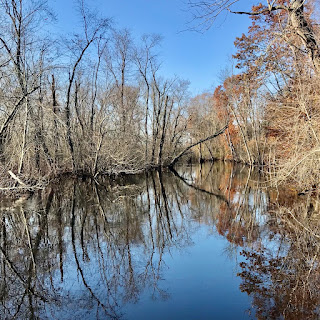