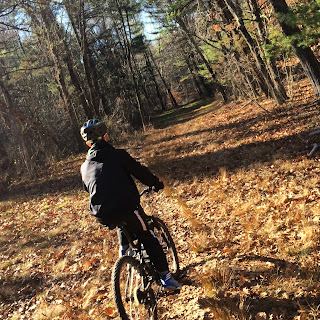 I had to buy him a burrito at Qdoba today, as incentive to drive to Bradley Palmer State Park for some mountain biking with me, but it was worth it. Chip and I had a great afternoon riding trails, getting a little lost, trying to avoid the areas where hunting is allowed... because being mistaken for a deer would be a bad. About halfway through our ride, Chip asked, "How many miles have we gone?" Ha. I was afraid to tell him I forgot to press the start button on the Garmin. "Ummmm... two?"

"That's not right", he replied. Funny how he instinctually knows how far we've gone, and yet still asks me how far we've ridden. Every time. On every ride.

"You didn't start the Garmin, did you." (More of a statement than a question.)

He was in a crabby mood for a short while after that, and later tried to convince me that he was just in a bad mood because he was thinking about school and his annoying math teacher... but really, he was mad at me because I didn't start the Garmin. I didn't have the numbers right. Sigh.

No Garmin, No Rules!

It was a great day for a great ride, though, and always fun to adventure with Chippy, my partner-in-crime. I'm crossing my fingers the new Kona 29er arrives this week. This amazing weather isn't going to last forever!