I Get By With a Little Help From My Friends 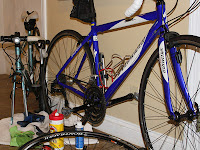 I've been hit with low energy today and not feeling up to speed -- which is usually my cue to take a deep breathe and take things down a notch. (Sunday I squeezed in a quick 15 miles of rolling hills before Chip's LAX game. Monday I hit an hour (plus) on the bike with intervals, followed by my conditioning class with Christine.) Yesterday was an "off day" from the bike --- and it's looking like today might be as well. Shayne emails a training plan each morning, which I've been pretty good at matching until today. I'm going to hate logging in  'zero mileage' in the training log if I don't get out on the bike later.

Feeling guilty, I decided to clean my bike instead! (As demonstrated by Shayne last Saturday morning.) I actually had a chain cleaning tool, degreaser and brush in the basement, which I'd never used. I remember picking them up one weekend after The Queen asked, "What's all that crud in your chain?" ... but then I couldn't figure out how to use the tool-thingy and only used the brush and solvent. (Which in hindsight is so idiotic because it could not have been easier to use).

Now I have a nice, clean, shiny chain.

Since I was on a roll... I decided to test my tire changing skills as well. (And, since I like to think I'm smarter than the average bear, I chose to flatten Will's tire instead of my own... just in case. Ha ha.) OMG. Try as I might, I could not for the life of me get that tire off the rim! Thirty minutes of struggling and I just couldn't do it! So pathetic.

It's a good thing I ride with friends who are stronger than me.