Day One - Saturday - Wellesley to Bourne

Mike and I woke early, loaded up the bike, and headed to Wellesley at 5 am. We stopped in Lynn to pick up Cyclopath-Donna Cohen on the way, and arrived at Babson College shortly after 6 am. While getting our gear together in the parking lot, several other Cyclopaths arrived - Sam, Mike Bencal and Ed Parish. It wasn't long before the others arrived -- there were 16 Cyclopaths heading out of Wellesley, and another 8 leaving from Sturbridge.

Waiting is always frustrating. When you are ready to ride, it's tough to just hang around.

Finally, after send-off words from Meredith Starr (founder Billy Starr's wife) and the Red Sox' Larry Lucchino, we were off!

Leaving Babson College to the sounds of the Black Eyed Peas, "Let's Get it Started", we began the journey to Bourne. Most of the Cyclos started in the faster lane, so it didn't take long for us to exit the college. I got caught up with adrenaline, and like last year, started the ride at a pretty fast pace (for me.) Somehow I lost Drew and Donna, who I thought I'd ride with, but the energy (and draft) from all of the riders carried me to Norfolk. (I did see Mike Kelleher Jr., and ride for a while with Sue de Vries and a WOW3 friend.) 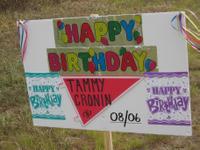 The first rest stop had a birthday party theme, and I noticed as I rode up that there were signs wishing people a "Happy Birthday". I thought it was nice, thinking, "Wow, look at all of the people celebrating their birthdays this weekend." It didn't even cross my mind that there would be a sign for me, when I stopped right in front of a sign that said "Happy Birthday, Tammy Cronin!" The birthday theme was awesome -- a nice touch.

The route from Wellesley is really nice. Hundreds of well wishers line the roads. I am always touched by the large number of people who come out early in the morning to cheer on the riders. They line the route from Wellesley to Bourne, with cheers, balloons attached to their mailboxes, and signs in their yards. Most of the signs wish the riders "Good Luck", "Have a Good Ride" or "Go PMC". I saw a few signs that read "I am a cancer survivor. Thank you for riding."

The signs from the kids are the best. Sometimes I couldn't really read what they wrote, (covered with sequins, feathers, and buttons) but I knew it took a lot of effort to make such art, and that made it special. 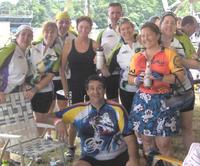 I arrived at the lunch stop at 11 am, called Nancy & Fred to check on the boys, and then grabbed some lunch. I ran into Mike Jr. again -- he was waiting for his Dad -- and then several other Cyclopaths finally arrived. (Don't misunderstand - I'm not a fast rider -- the others must have been chatting the whole time. I know they spent a longer time at the first rest stop.)

At lunch I saw Donna, Drew, Little Dave, and the Kelleher's who all started in Wellesley -- and Lisa, her fiance Brian, and Brenda, who started in Sturbridge (at 6 am and 70 miles away!) While under the big tent, we cooled off in the shade, ate some food, took some more pictures, etc... before everyone continued on to Bourne. I stayed behind and waited for Cyclopath Sheldon, who at 72, was riding his 21st PMC. Several other Cyclopaths arrived while I was waiting - Don, (who started in Sturbridge), Sam Zoll (another long time rider) and Bill Cantor. (Bill Cantor is the oldest PMC rider, turning 82 this week.)

Unfortunately, Sheldon missed a turn (a hard right on route 140 in North Attleboro -- of all places, the Cronin stomping grounds!) and was off course. Two of his grandkids were also riding in the PMC, and we waited for Sheldon to get redirected and back on the route. Fortunately, he was with two other riders, so he had company. After Sheldon arrived, ate some food and refilled his water bottles, we continued on our journey. (The grandkids rode on ahead to Bourne, at Sheldon's suggestion.)

Most of the riders were already long gone, but there was a small group of us out there sharing the road. Two brothers were riding with their Dad, and would occasionally pass us and then pull over a mile down the road to wait for their Dad to catch up. We, in turn, would pass them. A mile later, they would pass us, etc. This scenario repeated itself for 20 miles. Sheldon and I kept a steady pace and made our way to Bourne one rest stop at a time. The temperatures were still pretty high, even late in the day, so we didn't rush.

It was nice to get to Wareham and know we only had ten miles left to go. Wareham is actually my favorite waterstop. When I was a volunteer a few years ago, I worked in Wareham. It's a smaller, intimate water stop that many of the riders pass by as it's only ten miles to the finish. The riders who DO stop are the ones who need a final respite before the finish. It was a well needed break. Sheldon and I took our time, ate some fruit, (I had 2 mini Clif bars -- they were good!), and caught a second wind. Wareham, you rock! 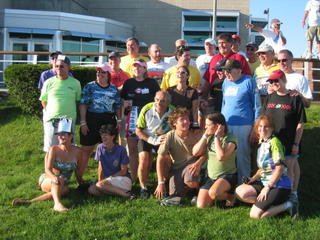 Sheldon and I continued on our journey, winding our way through Onset. We made it to Bourne, exhausted, before the Cyclopath team picture at the flagpole at MMA. Yay! Donna, Dori and Mike were at the finish, having volunteered at the academy all day. (Mike on luggage detail, Donna and Dori in Guest Services.)

After 10 or 15 minutes at the flagpole, during which 10 minutes were spent standing for pictures, I said hello and gave hugs to most of the riders but not all. (I will hear their PMC stories later.) I was anxious to get out of my cycling clothes and into the the shower. I showered quickly and grabbed something to eat with Mike, Donna and Dori. I didn't see any other Cyclopaths after dinner. I was so exhausted and was in bed by 8:30.

It was a great day.