I set my alarm for 4:15, but shortly after 4 a.m. the dormitory at MMA seemed to come alive. My bag was packed and ready to go, so at 4:15 I dragged it into the hallway, washed up, got dressed, and went outside to grab a bite to eat. It is amazing how completely dark it is at 4:30 am. The activity outside was impressive for such an early hour. Hundreds of cyclists buzzing around, ready to start the day. I quickly got in line for coffee, a breakfast sandwich and a yogurt -- met up with Cyclopath-Bruce for a few minutes, carried my duffle bag to the luggage truck, and ran into Cyclopath-Ethan taking a photograph of the 5 a.m. sunrise over the water.

It's still way too early for me.

After a few words with Ethan, I wished him and Adam a great ride to Provincetown, (told him to say "Hi" to everyone for me), and then met Bruce and his friend, Adena, for the trip to Wellesley.

My bike was soaked with condensation, but fortunately, I remembered to cover the seat before I went to bed, so at least that was dry.

It was 5:30 a.m. by the time we got out of Mass Maritime. Getting back onto the bike, after spending ten hours in the saddle the day before, was difficult. My butt was really sore. I kept thinking, as we headed north out of Bourne, that I wasn't going to be able to ride 70 miles aching like I did. Luckily, it only took a few minutes before I felt fine and the pain completely went away. I felt surprisingly strong. Unfortunately, I had a lot of knee pain at the start of the ride, (my seat may be too low), and the discomfort lasted for most of the first 20 miles.

The route itself was gorgeous. Tree-lined country back roads, ponds. cranberry bogs, Edaville Railroad, many horse stables and farms, golf courses. It was very lovely. There were only three hundred riders heading to Wellesley -- most of the PMC riders were cycling out to Provincetown -- and the overall tone of the ride was different than the day before. Riders were taking their time, enjoying the ride, being more social. No one passed without saying hello, most greeted you by name. Groups of riders slowed down to chat for a minute before moving on. The rest stops were smaller and more intimate, and you saw some of the same groups of people throughout the morning. It was really nice.

Bruce and Adena and I arrived at the first rest stop at around 7 am. Bruce was anxious to hook up with a faster group of riders. We were averaging maybe 14-15 mph in the morning, which was too slow for Bruce, who wanted to jump into a group of faster riders every time a peloton passed by. At the first rest stop, Adena and I agreed with Bruce that he should move on, and that Adena and I would stick together. We weren't going for any speed records. (I liked Adena.)

The "Happy Birthday, Tammy Cronin" sign made it's way from Norfolk to the Carver (or is it Middleborough?) rest stop. Once again, I pulled into the first water stop and ended up stopping right in front of the sign. Does that thing have a magnet on it or something? It was the second time I conveniently stopped right in front of it. This time, I didn't shriek, and was actually a little embarrassed. The water stop was very small, and there were about thirty or thirty-five riders there with me. Adena yelled out to everyone, "Hey Everyone! Here's Tammy Cronin! Wish her a Happy Birthday!" To which people shouted out, "Happy Birthday, Tammy!", and then proceeded to sing!

O.K. I think my face turned redder than the jersey I was wearing. One of the volunteers put two plastic leis around my neck, and took my picture with another rider, Jonathan -- who also happened to have a birthday on the 6th but didn't tell anyone, (and therefore didn't get serenaded by thirty sweaty cyclists.)

Completely embarrassed, thanks to my new friend, we hit the road. Of course riding at the pace we were, it wasn't long before many riders caught up with us. For a several miles I heard, "Happy Birthday, Tammy!" from passing cyclists.

The next 20 miles felt like a typical Saturday morning ride. Unlike the day before, and unlike the Provincetown finish, the route is very quiet. There are very few well-wishers who come out to cheer on the cyclists, and it doesn't have the same energy. Occasionally I'd see the PMC orange balloon attached to a mailbox, or a lonely sign with words of encouragement and thanks, but nothing on the scale of the great celebration of the day before. It's very peaceful, and if I weren't riding with a friend, I think it would be lonely.

At the next rest stop I was still feeling pretty good. I called home to let Mike know that I was 25 miles out. (Actually, 30 miles out.) Mike wasn't home, so I next checked in with Nancy and Fred, thinking he may have stayed in Attleboro with the boys. Nope. Not there either. So, I guessed that either he was in the shower and the boys didn't answer the phone, or he'd left for Wellesley already. (It was the latter.) Adena and I refilled our water bottles, used real bathroom facilities (not a port-a-potty!), and continued on. It was 9 a.m.

Most of the next stretch was fairly uneventful. We made a wrong turn at one intersection (My fault, I was leading), but saw another rider heading back in the opposite direction. We soon pulled over, checked the map, and then turned around and got back on the right road. I thought of Sheldon the day before, and how quickly, and how easy it was, to get lost if you missed an arrow. Fortunately, we saw the other rider and realized the mistake early.

At around mile 60 fatigue started setting in. I was tired of being on the bike, and the hills seemed to be growing more mountainous with each passing mile. The last 7-10 miles were a challenge for me by the time we reached the hills of Dover and Wellesley. Adena was really awesome and would fly up the hills, and then wait for me while I slowly climbed the same hill she just breezed up. My bike wouldn't shift to the smallest chainring at that point. I was stuck on the middle chainring. I later discovered that my tire pump had slipped and was blocking the chain. What a dummy. 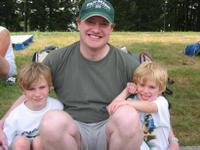 At mile 67 I started getting excited that the finish was near. Only one mile to go!

Or so I thought. We passed a few riders who asked, "Are we there yet?" Turns out that the route is actually 74 or 75 miles, not 68, and no one bothered to tell us.

It doesn't seem like a big deal, but when you're expecting to cross the finish line at any moment, for six or seven miles, it's quite painful. Mike was at the finish line and said that many riders had commented on the mileage, and most were saying it was around 73, 74, 75... (I had 75.9 - I later checked with Bruce, and he had 74.)

We arrived at Wellesley at 11:30 and Mike and the boys were waiting for me, which was so, so nice. I was so thrilled to see them. Will was really impressed with all of the cyclists crossing the finish line, and told me that he wants to ride the PMC with me some day. (That would be 9 years from now.) I'm glad he has the PMC Kid's Ride to participate in.

I felt really great after the ride. My energy definitely returned the minute I saw the boys. (Andrew, of course, was "starving". A condition he claims every hour.) We found a table and grabbed some lunch from the barbecue, said goodbyes to Bruce and Adena before they left, and then gathered my bike and belongings for the drive home.

As we were exiting the finish line area, we ran into Little Dave and his sweet daughter! They were waiting at the finish line for me to come in! Somehow, I don't know how, we missed each other when I arrived! Little Dave had planned to ride the Wellesley return with us, but developed a terrible blister during Saturday's ride, preventing him from joining us. It was so sweet that he and his daughter came out to Wellesley to congratulate us. I hope they know how much I appreciated it.

A few more thoughts and anecdotes from PMC weekend to come!

Thank you for reading, and more importantly, thank you for your support! I may be the one on the bike, accepting the challenge and riding the miles, but YOU are the ones, through your donations, who make it possible. Thank you!