How many years have I complained about the gearing on my Trek Domane? Probably since I first got it in June 2013!

I always think about it in-season, especially as I'm trying to mash up the hills of Vermont in a too-high-gear, but I can never find a break during the summer to leave my bike for any length of time to take care of it. I discussed my issue (several times) with two of the mechanics at FitWerx who kinda/sorta understood what I was looking for, but also told me that I just needed to get stronger... (oh, good grief)... and gave me a rough estimate of $250 (!) to replace the cassette and derailleur.

After my mechanical in August at the Farm to Fork Fondo, I knew I had a bent derailleur hanger and the bike was riding really rough and sluggish. I'd met Guenther Anger from VeloFix Boston a few times this fall and decided to give him a call. VeloFix is a mobile bike shop -- he brings the shop to you! So perfect.

Guenther came to my house and repaired, cleaned, and tuned up the Domane perfectly. He replaced the chain, which was totally shot, and the bar tape that was starting to fray. (Zane replaced it two years ago. It was time.) He also ordered a new cassette for me ($75) and will replace it when it arrives.

When he was done, he went to work on the Kona. I just had it tuned in June so it wasn't in despicable shape, but he did cut down the handlebars for me!!! (Oh that bar is so much more comfortable now. It just reminds me of how much JRA Cycles kinda sucks.)

VeloFix took care of two of my major annoyances and I looovvveeee my bikes again! 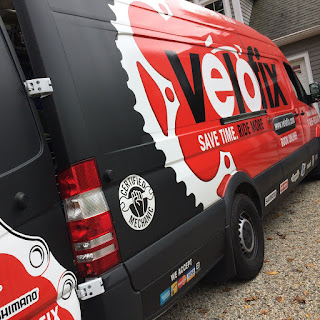