Searching for a New Ride, Part 3: Patience is My Virtue 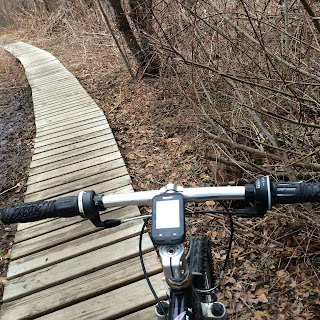 Alas the weather has been phenomenal for mountain biking, and yet I'm still grinding away on The Deathtrap. I'm squeezing in some local trail rides here and there when I can't get over to Bradley Palmer or Lynn Woods ... and of course I have P2 twice a week, (homework and a coached session with Shayne), to amp up my training.

So where is my new amazing bike? Haha... what a saga.

When I decided to go with the Kona Kahuna on November 4th, JRA Cycles didn't have my size in-house, so placed an order with Kona with the expectation the bike would arrive by the end of the following week. Several days later, midweek, Adam gave me a call to say there'd been a delay and the bike wouldn't be available for another two weeks. (OK. No prob. I could wait two weeks.)

Those weeks ticked by -- approaching Thanksgiving -- and I expected to get another call from Adam/JRA Cycles letting me know the bike was ready for pick-up. I sent an email inquiring how much longer it might be... only to learn there was yet another delay -- and the bike now wasn't expected to ship until December 2nd. (OMG, my race prep time is shrinking!) Adam estimated the bike would arrive a week after shipping -- at which point JRA Cycles would build it up ASAP and give me a call. He said I could expect to see the bike by December 11th.

Ugh. Not great. Not only do I need to train for my race, I need to acclimate myself to new 29" tires and disc brakes! But, there wasn't much I could do about the situation other than cancel the order entirely and look at other bikes. Like a Niner. (Which teammies Addie and Echo ride.)

I've been crossing my fingers for no snow while waiting for this bike.

So... December 11th arrives... and, well... you guessed it. No bike. Adam checks with Kona and learns the bike shipped on December 7th and should arrive soon. How soon is soon?? That's anyone's guess.

I spent another mild weekend riding The Deathtrap with it's four working gears.

Chip and I drove down to Medford on Tuesday, and I kid you not, they had the wrong bike.

I'm not feeling the love from Kona.

Adam was truly apologetic and the shop got in touch with Kona about the mix-up -- promising to see that the correct bike would be delivered overnight express and ready by Thursday.

I've been riding the old bike and working things out. Getting the Kona this late in the game is really not going to make or break my race, and I know that the bike shop was caught in the middle. I mean, it is what it is. Just a bump in the road.

The good news? IT IS READY NOW! Adam texted me a photo!! I'm sighing in relief.

It's been exactly SIX WEEKS since my purchase back in November, and I can finally say it's here!! This bike is arriving with a serious chill vibe to it, because who knew I could be so freaking patient?!