It was a coooold day for ride #3 of the Coffeeneuring Challenge. Chip and I were deceived by early morning sunshine, thinking it was a bit warmer than it actually was, and made a plan to take some back roads to Russell Orchards in Ipswich for coffee, cider, and donuts. Chip remarked, "Oh! I can get a pumpkin!" as he grabbed a backpack despite my skepticism, while I grabbed the Garmin, knowing his propensity to ask how far we've gone every half mile. (I estimated our ride to be 15-20 miles... I was a bit off.)

Did I mention it was cold? OMG 45 degrees, although the Garmin stats I uploaded later stated it was 41. Ya. Winter is here. We pushed through the wind while our faces went numb, neither of us understanding a word the other said because our ears were covered. We made it to Russell Orchards, and that's when the fun began.

Chippy then went in search of a pumpkin... and took half an hour amongst the hundreds of pumpkins trying to choose the "right" one! I was dyyyyying as I watched him pick up one enormous pumpkin after another. What was he thinking?! Eventually he settled on two medium-sized pumpkins, (which he named "Plumpkin" and "Pulpy"), that barely fit in his backpack. Together they weighed 11.6 pounds. 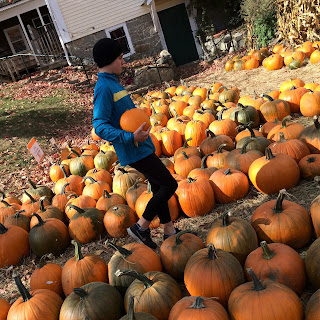 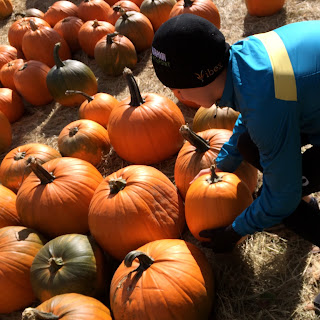 OMG, the ride home was hysterical. With nearly 12 pounds of pumpkin on his back, we rode a bit slower,  stopping a few times to adjust the backpack. I had a feeling he wouldn't make it the entire 14 miles back to Beverly, and I'd end up hauling "Plumpkin" and "Pulpy" home, but he persevered. At this point in the day, the sun was gone, and heavy cloud cover made it feel even colder. The miles went quick though, as Chip would share his thoughts as he rode... "I think all pro riders should weight train this way. With pumpkins. It's a pumpkin challenge."