Spectating at Gran Prix of Gloucester 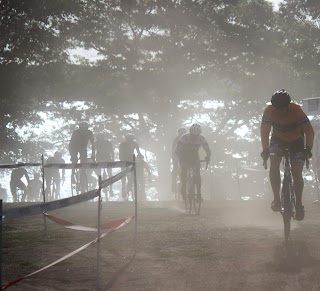 On the heels of hosting Tiffany Pezzulo over the weekend, we had planned to have VKCX rider Caro Gomez-Villafane, (now with Specialized/Muscle Milk), move in during the Holy Week of Cross, but last minute funding issues forced her to pull out. I didn't tell the boys she wasn't coming until the last minute... because I wanted them to keep their bathroom clean for her visit, (hahaha)... and I'm sad she couldn't make it out here. Hopefully it will work out another time.

Still, there was a lot of racing to catch at Gran Prix Gloucester this year! Chip's friend, George Piepgras, is doing terrific in the U14 junior category, so we went up to Gloucester to watch him race. Chip is still intent on becoming a road pro -- (and thank you Tiffany, AKA "If you're going to go pro, you're going to need pro socks", for giving him your DNA racing socks! He looooves them!) -- George and Chip are good training buddies for their pro ambitions, and George did great in Gloucester.

Other people to watch in Gloucester included VKVIP teammie Olivia Lord and her young daughter Poppy, Strava friend Karen Lynn, some of the girls from NEBC, and of course my coach, Shayne Gaffney. Shayne had a horrific injury this summer and was off the bike for a long time -- so it's really inspiring to watch his comeback.

Caro, Rebecca, and Zane were missed a ton -- but it was a fun weekend of spectating in Gloucester.