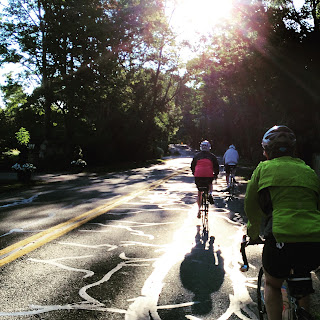 The Saturday morning Cyclopath breakfast ride consisted of just four riders this weekend, which is a far cry from just five or six years ago when we'd have to split up the group because we overwhelmed the breakfast establishments we visited! Word is, Ducky will no longer be joining us on Saturdays, which makes me sad. At 85, she's still very strong on the bike, and has always been my inspiration. I could never really gauge how old Ducky was -- as she went bombing up hills leaving everyone in the dust -- and then one day I learned she was older than Av, who at the time was 80. OMG. She's such a badass. Hopefully she'll come out for some short rides when the weather is cooler and we stay more local.

This past Saturday, Paul, Joan, Gail and I took a ride up the coast to Magnolia, stopping for breakfast at the Beach Street Cafe. I took a spill early in the morning, which left me hurting. The light was poor and it was hard to distinguish potholes from shadows on the road. I was a split second behind Gail when she swerved quickly to avoid a pothole, (and didn't have time to warn me), as I hit the hole head on, landing on the pavement. I walked away with few bruises and cuts, but also came down hard on the top tube, which wasn't pretty. Ouuuuuch. It wasn't until later in the day that my injuries became better known. Seriously, no fun.

Still, we had a nice ride up the coast on a perfect day -- which actually started  off cool and I had to break out the arm warmers and vest. The temps are expected to rise into the 90s this week for a blast of summer, which should be awesome. I love summer!