The Breakfast Ride: Where Kristen got THREE Flats 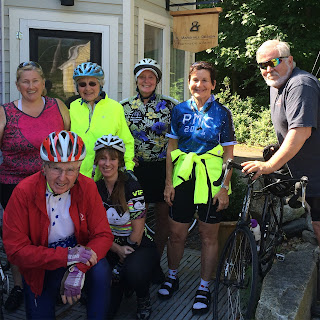 A late ride report from the breakfast ride two weekends ago: We haven't had a large turnout of Cyclopaths this year -- though not from lack of effort on my part -- so when I heard that Joan and Gail were away for a few weeks, I had a feeling I might be riding alone when Saturday arrived. I invited a few friends to join me if they could, and happy for me, Kristen was free! Yaaaay, Kristen!!

Well surprise, surprise, a few Cyclopaths did manage to make it as well... Mike S., Paul G., Brenda, Arlene and Ducky! The largest group we've had so far! (Wow. I remember the days when 2 dozen would show up for a ride.) At the same time that everyone arrived, I got a text from Kristen saying she had a flat on Lafayette Street, so I sent the gang on their way with a plan to meet them at breakfast at Henderson's.

After breakfast, we looped Miles River Road and then turned back to head out to Bradley Palmer State Park, where we said our goodbyes to the others as Kristen needed to head back -- but then, OMG, she got another flat!

And then a third flat, near the Beverly Airport. Wow.

It was a gorgeous, fun ride, despite the tire problems, and I was soooooooo happy Kristen joined us. Hopefully she'll be back for another breakfast ride when her triathlon schedule eases up a little. It was nice to have her cheerful self along for the ride.