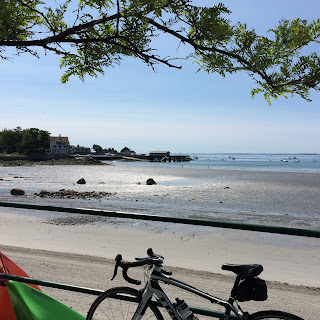 I haven't been posting to the blog lately... though I've been riding. My training has taken a back seat to family commitments and house projects as the summer gets underway. For the most part, I've been completely emersed in landscaping projects -- bringing life back to my flower gardens after a tough winter, (during which I lost two small hydrangea and several other perennials), and overhauling the vegetable beds that were neglected last year in favor of RAAM. My projects are almost done... so soon I won't feel guilty for taking off on a long ride.

On Sunday, I headed out to loop Nahant, lost track of time, and then had to hustle home to get Chip to his last lacrosse game in Danvers. We were almost late. Oops. This has not been my best year as a lax parent - though fortunately, the coaches have been pretty cool about it.