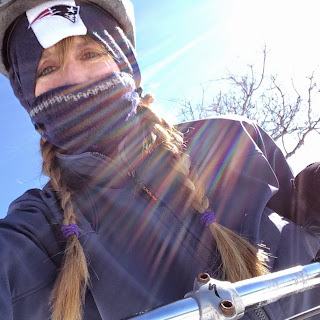 It's World Championship weekend, with both CX Worlds and the Super Bowl. Yesterday I watched our girl Carolina Gomez Villafane race for her home country Argentina in the Cyclocross World Championships in Tabor. We were thrilled to be one of Caro's sponsors as she headed to Tabor, and sooooo proud of her finish. World Cup points placement put her at the back of the pack to start, but she moved up to 25th place during the race until another rider's crash held her back. She finished the race in 39th place -- sooooo happy for her! (Also competing at the World Cup was Vanderkitten's Elle Anderson (now on the BMW p/b Happy Tooth Dental Group team) finishing 40th, (I could hear Jono cheering from California); and local racer Crystal Anthony placing 25th. (GREAT finish for her. She should be thrilled.)

The women's race was really exciting. Edge-of-your-seat racing. OMG. Pauline Ferrand-Prevot getting past Sanne Cant for the win. OMG. Really exciting race. Why women's cycling doesn't get more attention is a mystery. It's so rad.

The men's race earlier today was not nearly as exciting to watch. Perhaps because I have a less vested interest in the men? Let's face it, women rock. But I was cheering for Jonathan Page today, and felt a tug in my heart seeing him cross the finish line at 23rd. He had a heartbreaking week.

We're on to the Super Bowl. Cheering for the New England Patriots, of course. I bundled up for my ride in Patriots gear today, (nineteen degrees), and set off to look for the Snowy owls down at Goldthwaite Reservation. Sadly I didn't find any... but I'll keep looking.