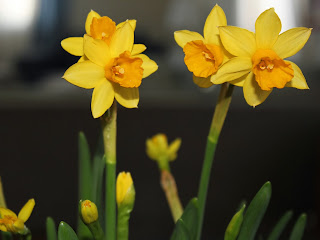 Another storm system is set to hit us this week, with rain/snow arriving Thursday. We really are getting pounded this year, (although it's probably not unlike any other New England winter). If it's not bitter, bitter cold -- morning temps have been in the single digits -- than we're probably getting a storm. And it's probably going to have its own name and hashtag. (Hercules, Kronos, Maximus, Pax.)

It's a little crazy to be naming winter storms... but Dion was a good name.

The last few days have been tough, and I didn't make it to my workouts. I seem to be holding a bug at bay. My stomach is churning and feeling queasy and I don't want to eat anything, but fortunately that's as far as it's gone. Other friends are reporting much, much, much worse. Hopefully tomorrow I'll feel better. I have a power threshold cycling test at P2 at 9 a.m!

Thanks for the flowers, Nancy and Fred! Nice to have small reminder of Spring in the house!