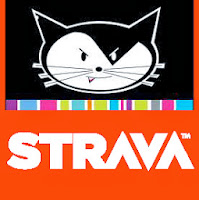 It was a while ago that I read The Strava Files in Bicycling Magazine, and at the time, I couldn't quite understand the appeal of Strava or what it was all about. I was neither on Strava, nor did I have a Garmin, and cycling stats and the community aspect of it all just wasn't on my radar.

Since last June, however, I've been uploading my rides, (the data collected from my Garmin gps), to Strava as part of Shayne's coaching. (Or at least I do that when I remember to press the start button on my gps.) It was helpful to get my coach's feedback during the season and receive kudos from the small handful of friends who ride and happen to be on Strava. I've also acquired a few cycling buddies I know only through Strava, who chime in every now and then with a comment or kudo -- And I love seeing their rides in return -- especially Chris S. and Kyle W.'s. They both amuse me, and wow, do they ride!

Since becoming a VanderkittenVIP, I've received even more encouragement and inspiration from my fellow kittens. The girls are amazing. Receiving 8 kudos for my simple 10 mile ride on a Sunday was just so nice. I know it wasn't an epic ride -- (and seeing Chris ride 100 miles that same day makes me shake my head) -- but it's January in New England and the wind off the causeway knocked the stuffing out of me.

Most of the VKVIPs on Strava lately are riding in warmer locales -- California, Arizona, Australia -- but a few are battling the same elements I am. (Candace is in Pennsylvania and had the same rain we had a few days ago.) I haven't recorded my trainer rides or gym workouts, but I might start doing that just to keep track of what I'm doing. I woke up this morning thinking I've been lazy, forgetting that I actually went to P2 yesterday. Huh. I really should write these things down. They say the mind is the first thing to go.

I got 8 kudos on Sunday -- it was a nice pat on the back for my effort -- and I kinda needed it. Thanks, kittens! (And Chris, Shayne, and Lila, too!) You brought a smile to my day.