Bringing in the New Year 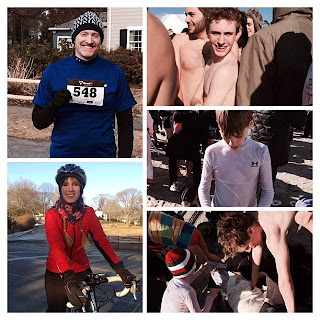 It was a crazy way to start the new year, but Ethan and I headed out at 8:30 a.m. for the Frozen Fifteen bike ride -- our 15 mile loop of Marblehead Neck and the perimeter of town. A fifteen mile bike ride doesn't sound like much, but on a 23 degree day, with a wind chill of 13 and scattered patches of ice to keep us alert, the ride did take a lot of effort.

Heading out around Marblehead Neck I felt pretty good, until we hit a headwind coming back over the causeway. It wasn't strong, but it was bitter cold. We looped the outer perimeter of town, toes beginning to numb, before heading back to Swampscott. When I left Ethan at his street, I was still a little short of 15 miles, so I continued on to complete the 15. Bike ride done.

Meanwhile, Mike was in Salem running the Frosty Four -- The Wicked Running Club's first run of the new year. With Mike on his four mile run, I had no time to warm up after my ride, as the boys were participating in the Swampscott Yacht Club's Polar Bear Plunge with friends and teammates. This year's plunge benefited two charities, including The Haven Project for homeless teens. It was Chip's third polar plunge, and Will's first, (dunking the Atlantic with his high school swim team). Both braved the icy water -- a 36 degree water temp -- thus completing our own little triathlon relay (of sorts). Bike, run, swim. Happy New Year!