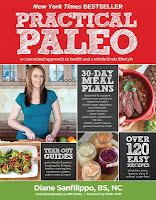 My post for the Paleo Nut Bars has been popular, receiving quite a number of hits in the last few days. A friend asked me if they were low cal. No, sorry, they're not. I've calculated the calories though. If you want that info, send me an email. (I don't want to scare you.)

I didn't adopt a paleo diet to lose weight, although I wouldn't mind dropping a few pounds. Who wouldn't? I cleaned up my diet because of my health. I struggle with fatigue and a condition called hemolytic anemia. (In a nutshell, red blood cells are destroyed too early in my spleen -- while my bone marrow tries to keep up.) As we've all learned from Lance Armstrong, athletes covet those oxygen-rich, pumped up red cells for performance and endurance. (And since blood doping is out of the realm for me... Wow, that is insane, isn't it?)

I picked up a book called Practical Paleo after several people in my farm co-op suggested a few recipes in it. As I read the book, I became more interested in cleaning up my (our) diets. Mike is on board with a paleo lifestyle, Chip is half and half, and Will... is Will. ("Don't take away my processed fooooood! My chocolate pudding snack packs, Chips Ahoy and Kraft Mac & Cheese!!! I'll DIE!" (So typical Will.)

Adopting a whole foods approach -- eliminating refined sugars, grains (cereal grains, wheat, corn), dairy, and all processed foods -- has helped restore my energy. (A year ago, my bike sat idle all winter long. This year, it's a different story.) I no longer have the overwhelming fatigue that used to hit me in the afternoons. I feel a hundred percent better. I know I'll always have a low hematocrit and B12 -- I can't control that -- but I can definitely control the food choices I make and how they effect me. Paleo is working for us!