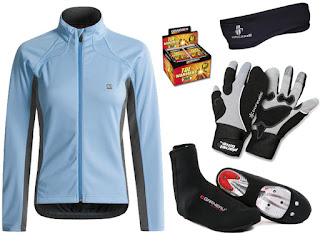 I'm still a newbie when it comes to winter riding, but last winter's snowless months had me out on the bike early, in February. (Yes, it was cold, but by the time December and January passed, anything over 40 degrees felt balmy.)

I usually stop riding in October, but this year I was challenged to keep riding through the winter. The argument was, "If you snowboard when it's cold, why wouldn't you ride if the streets were clear and you're dressed for it?" Ahhhh, true... what it really comes down to is finding the right mindset... and clothing.

For our first few frostbite rides, I was waaay overdressed. I've since been tweaking my layers with each ride. (32 degrees is the lowest I've headed out in.) I'm finding that a silk layer under polypropylene cycling tights keeps my legs sufficiently warm. (The tights are on the big side, so I have lots of breathing room.) Wool socks partnered with Garneau booties over my cycling shoes keep my feet warm; A Hincapie Arenberg headband (with a ponytail port!) covers my ears; and I have those awesome Planet Bike lobster claw gloves that look pretty funky. I wear an UnderArmour jersey as a base layer under a very stylish Pearl Izumi Gavia jacket that Ellen handed down to me, (along with the tights. Thank you, Elle). It doesn't seem like much, and I sometimes start off feeling chilly, but once I start riding, those layers heat up and I'm warm and toasty.

Mike got me a new Pactimo Cascade jacket for Christmas... though he hasn't given it to me yet! He's making me wait until December 25th. It's Chili Pepper Red, which is all kinds of awesome.