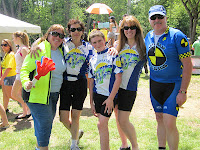 We had a perfect day for the Tour de Cure -- We couldn't have asked for better weather! Will and I rode the first 20 miles at a good pace. He had been bragging that he was a better rider than I was because he could climb the hills faster. I tried to tell him that he's a great sprinter in swimming too, but that didn't make him the best swimmer on his team! He didn't care for that analogy!

I set a fast pace for him. It probably wasn't fair, but he really annoyed me with the hill thing. Just when we'd slow down behind a stream of riders, I'd pass them and he'd have to pick up speed. I could hear him muttering under his breath. He finally asked me to slow it down around mile 20, but a peloton of ECV riders came whipping through at the same time, telling him he was doing great, and it gave him a shot of adrenaline. (He couldn't believe how fast those guys were riding, at what would have been their 80 mile mark on the 100 mi ride.)

He took a very long break at the second water stop, and as we were heading out, fellow Cyclopath Margie came in, so we waited for her to refuel and rest. The three of us headed out for the final leg and were surprised to find Cyclopath Donna Cohen stopping the traffic for us at a large crossing! Donna drove ahead to a few crossings and intersections along the final 8 miles to stop traffic for approaching riders. It was very cool to have her escort us -- I know the other riders appreciated it, too! (We ran into Cyclopath Bruce at the finish, riding with the 4C's, and took this photo).

At the end of the ride, we completed the 32 miles in 2 hours, ten minutes. Will was wiped out. (And he now admits that I'm the better rider.) :)