The day started out simple enough. I woke up early and headed north to New Hampshire, where I met my cousin Richard at a Park & Ride lot. We had some insurance details to take care of at the cottage in Ascutney, so decided to meet and drive up to Vermont in his truck together. I brought my bike with me, planning to ride the Boscawen end of the Northern Rail Trail when we were finished.

We had a great day and got a few things done -- and even discovered daffodils blooming near the porch! (Neither of us are ever up at the cottage in April, so the flowers were a surprise to us both. I wonder who planted them?) 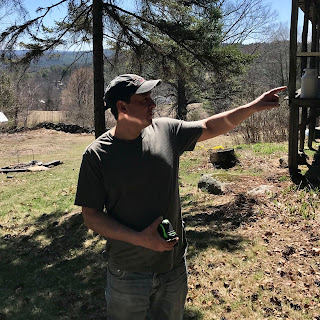 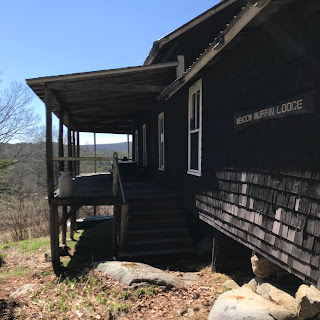 After taking care of some chores at the cottage, and stopping in Claremont for lunch, Rich dropped me off at my car in Bow. I typed Northern Rail Trail into Google Maps and hit "directions", which showed the trail only 9 minutes north. Wow! Closer than I thought! (Previously, I had googled the directions at home, and it was a 20 minute drive from the Park & Drive lot.) 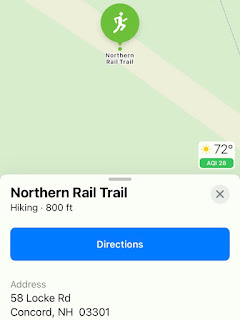 I drove north to Exit 16 in East Concord and ended up in an out-of-the-way industrial park with what looked to be a trail, but no parking. I checked the map again and yep, "Northern Rail Trail". Weird. It was rather sketchy, so I decided to leave. As I was driving back to the main road, I saw a small trail head marked "East Concord Trails". I hopped out and looked at the map posted, and it looked like it met up with the Northern Trail... so I figured I'd check it out. I texted Mike to let him know what my location was just in case I didn't return.

It was an awful ride. As I rode down the main trail, I passed two small trails off to the side, but kept going. The further I rode, the less interesting it got -- becoming wide and hot, out in the open, typical of an old rail line -- so I continued. Eventually the trail came to a dead end, but appeared to pick up again at the back of a field, in some woods. So I crossed the field and found what looked to be an old trail that hadn't seen much traffic. I looked at my gps and saw I was traveling almost parallel to the Northern Trail, heading in the right direction to intersect it.

I forged on, climbing a rocky hill, and turning down another abandoned, muddy, wide, brush filled trail that lead to a powerline that Google Maps labeled "Northern Trail". Fuckity fuck. It was not THE NORTHERN RAIL TRAIL

With no way to coninue on or find an exit point, I turned around and went back through the evil scrub I'd just waded through. At the bottom of the hill, I got off my bike to recheck the gps on my phone, and found several ticks crawling up my legs. I pulled off three, thought I was clear, and then found a fourth. Argghhhh! Nasty buggers.

Riding back to the trail head I kept checking myself for ticks, hoping I got them all. Eventually I came to one of the little offshoot trails I'd passed an hour earlier, 1/4 mile from the entrance, and took the detour.

Lo and behold! Nice, pine covered singletrack with views of the Merrimack River!

I was kicking myself. After a hot, sweaty hour on dry hard pack and tick infested non-trails, I could only spend 15 minutes riding by the river. I was beat and still had a 90 minute drive home. When I got back to my car, I texted Mike for "proof of life", (lol. His words), and headed home. It was a long day.