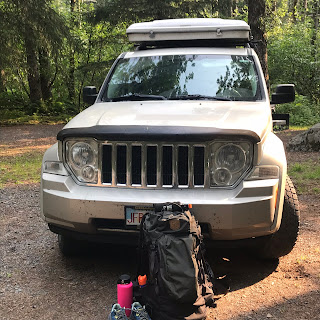 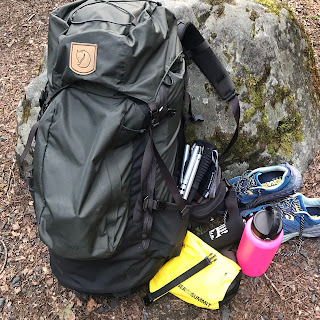 Awwwww it was sad to see the solo part of my Alaska adventures come to an end. I had the best time exploring the peninsula, although sometimes pack living got a little old. I only managed two showers during the week, (#wildhairdontcare), and I lost my toothbrush somewhere and ended up brushing my teeth with toothpaste on a gauze pad. Overall, however, its been pretty cool. I only wished I had company! I think Mike and the boys would have enjoyed it.

A brief wrap up -- I loved the Jeep camper! After my near-disaster in Homer when I temporarily lost the pop-up crank, I was diligent about keeping track of its whereabouts. Setting up and breaking down camp was easy — less than a half an hour — and I liked the freedom the Jeep gave me. I’d definitely do that again.

I overpacked for the trip, but that was due my planned participation in Alaskaman. I had biking and running and hiking gear with me — extra stuff that I ended up not needing. That was unfortunate. I sent home a few things when I got to Moose Pass to lighten my pack, including some warm weather clothes since I'd been cold in Seward and Homer. In retrospect, that turned out to be a mistake as a few days later a heat wave hit Anchorage.

I also sent home some of my running gear after Julia ditched me on the run. (Yes, it's true, she did that.) I knew she was looking for a support runner through February, March, April, and May, (since her previous support runner, her husband, had initiated a divorce)... but the odds of her finding a runner on June 19th, a week before the race, were pretty long. By the time I landed in Alaska I was mentally prepared to run.

I was therefore quite stunned when she cut me loose via text message in Alaska while I was on my way to the Kenai.

(A brief text message. No phone call. No thank you for the commitment I'd made or the time and money I'd invested in training over the last three months... nothing. Harsh move. If I were paying attention, it was my first red flag to the shit show that would come later, but at that moment I didn’t have a clue.)

Anyway, back to the Jeep and pack living...

I didn’t use the equipment Ron provided with the Jeep rental, except for the bear spray, (which I carried but didn’t need), and both sleeping bags, which I used as blankets. I slept in a Friendly Swede liner on a Klymit sleeping pad, and used the sleeping bag as a blanket. A few nights I needed both bags. I didn’t cook any meals and instead grabbed breakfast on the road and ate lunch/dinner in small restaurants because I didn’t want to keep food in the Jeep. (Because of, ahem, bears).

Surprising things that came in handy: a microfiber pack towel, sleeping bag liner, uniqlo down jacket, and a sleeping mask.

Things I could have left behind (other than the race-related gear): journal, nutrition bars, headlamp, half of the first aid kit.

I'll have a lighter pack the next time.