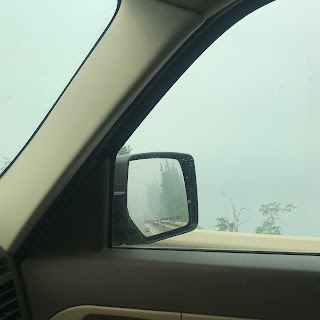 Sunday. I left Homer before 8 and made my way back up the Sterling Highway on my way to Seward. There aren’t many highways in Alaska, so there are limits to the direction in which you travel. As I passed Anchor Point, I noticed the air was getting denser, and the distinct odor of a campfire growing stronger. I’d seen posted warnings about a forest fire near Sterling on my way down to Homer a few days earlier, but this was the first time I’d encountered it. As I approached the town of Sterling, it was like driving through heavy fog — I could only make out the car in front of me. In the coming days, the fire would grow to 100,000 acres and the smoke would obliterate the mountain views for days, from Seward to Anchorage, but lucky for me, that was still several days away.

I arrived in Seward to discover all of the campsites “full”. It was noon, and I hadn’t eaten much during the day, so I parked in downtown Seward (which is barely a block, no larger than old town Marblehead), and walked around. I had lunch, browsed some shops, and then decided to hit the road and maybe try Miller’s Landing for a campsite. At this point, it was after 3:00, and as I turned down the street passing the waterfront campgrounds, noticed the “full” signs were down and several dozen open spots. Timing is everything! The solstice weekend was over and everyone was pulling out. I found a campsite directly on the water. Awesome.

It was chilly and very windy by the water, but I didn’t mind. The walk along Resurrection Bay was stunning and stretched for miles, and I had a picture perfect view of the bay and mountains. It really couldn’t be any more perfect. Eagles and sea otters and ravens...just wow.