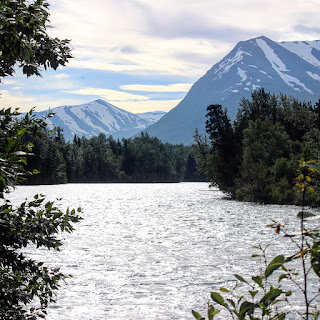 The next morning I drove out to Cooper Landing early, planning to packraft with Kenai Backcountry Adventures, but after learning it was just me and a guide, I changed my mind and joined a small group of people kayaking the Upper Kenai with another outfitter instead. I spent three hours on the river with some fun folks, (instead of 6+ hours, solo, just me and a guide), and I was able to include a hike on the Russian River Trail as well. Better plan! My morning on the Upper Kenai River and Russian River was spectacular — salmon were running (sockeye?) and the river was teeming with fishermen lined up along the Russian River competing for fish. 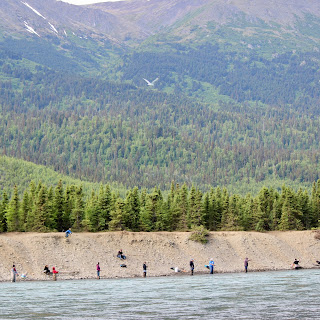 Homer was my next stop after hiking the Russian River Trail, and as I approached the southern end of the peninsula, the weather shifted and I was met with clouds and rain. A pretty contrast to the upper end of the Kenai.

I explored Homer, drove along the bay to catch glimpses of Grewink Glacier through the fog, stopped for coffee and food at Three Sisters Bakery, and headed out to Homer Spit. It was the solstice — or rather, THE SOLSTICE, which is an actual event in Alaska — the longest day in a place where the day never really ends. At the end of the Spit I learned the campground Ron recommended was full, (as were two other places on the Spit), so after checking out a few shops, I returned to the start of the causeway where The Mariner campground sat and found a spot. (Actually 2 spots, which was lucky because someone stole the spot I’d paid for and I just didn’t have the energy to argue.)

It was such an amazing day — Alaska doesn’t disappoint. 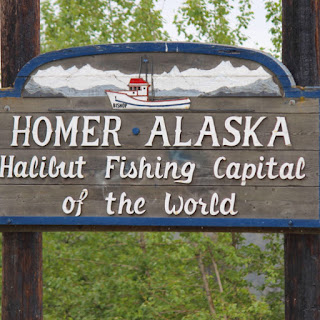