OMG... today was another CLASSIC ride with Chip. Today we started out in Beverly for a short, chilly ride up to Beverly Farms, where Chip fell in love with the donut choices at the Half Baked Cafe & Bakery. After choosing a Lucky Charms donut and a Maple bacon donut, he spotted rainbow cupcakes and wanted one of those, too!! OMG, where does he put it all?! He had me laughing all morning.

After after inhaling his "breakfast", we turned around and headed back to Beverly, passing Captain Dusty's ice cream shop along the way. Chip lamented that they were closed, to which I responded, "You can't possibly eat ice cream after all those donuts." He disagreed!!

Shortly after Captain Dusty's we came up to a candy shop at Pride's Crossing... and of course he wanted to stop. Walking inside, he spotted what he wanted -- "Pop Rocks!! Can I get those? They remind me of my childhood."

It was a fun, crazy, typical Chip ride -- It's going to be a great summer. 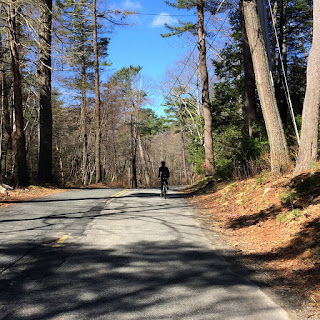