Back at camp, we figure out the order everyone is racing in, and the estimated time it might take to loop the 16.5 mile course. (Our predications are a wild guess.) In our original plan, I was set to go fourth, just as dusk was settling in, but I can barely move my hip and I've yet to get on my bike. I'm scratched from the current order, (no night lap), and pushed to Sunday, giving myself time to recover.

The ride starts at noon, with a "Le Mans start" -- a half mile run up the course where riders scramble to locate their bikes and jump into the race. Shannon is leading us off, so I go down the course with her bike and wait for her to reach me on the run. As the race kicks off, and the crush of riders come screaming by, I worry I'm going to miss her... and then here she comes... wearing kitty ears.

(Ohmigosh I love her.)

Shannon gets us going with an amazing lap and this thing is ON.

Eric takes lap two, followed by Sandrine. They crush it.


A few hours into the race, reports come in of a horrific crash out on the course, as we watched a medevac fly overhead. Eric passed the accident scene during his lap and it was a gruesome crash -- the rider's nose torn off and cheekbones smashed, he had to be intubated. Watching the helicopter leave Willow Springs, knowing the rider had been so critically injured, lying in the desert for an hour and a half before a medical rescue, was unsettling. I was suddenly gripped with a "WTF am I doing here?!" kind of feeling.

Friends and teammates texted earlier in the day to see how I was doing, and I reached out to several to let them know what was going on. Words of encouragement came flowing back -- including a huge boost from Will. I'm always his biggest cheerleader when the chips are down and he hits a low point -- now the tables have turned. 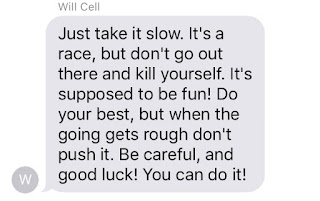 Minutes later I get a text from Rebecca -- and it feels like the universe is trying to pick me up. "Having fun?" She asks. I take a deep breath and text back, "I crashed on the pre-ride pretty hard. On the last drop of The Bitches." She responds, "real mtbing. Impressed you're still at it." I shake my head, tears falling. I wasn't still at it -- I was falling apart. But I also didn't want to text back that I couldn't do it. More deep breaths.

I can do this.

Before Sandrine finishes her lap, Colin and I head out for a light spin to see where I'm at. I'm very sore but able to ride with my left butt cheek shifted off the saddle. I'm determined to get back on the bike Sunday.

Addie heads out next at 4:30 and finishes at dusk, followed by Will, Michelle (who crashes), and  Jennifer (who also crashes). First rotation done.

It was a great day -- but also emotional. I crawl into our tent a little after 1:00 a.m. and close my eyes for a bit.

We still have almost 12 hours of racing to go.