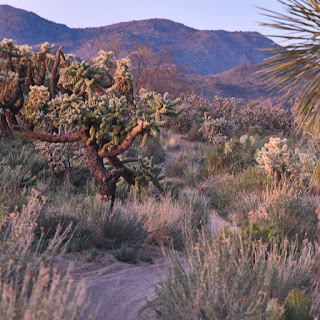 Thursday morning, while enjoying sun and coffee at Starbucks with Sandrine and Michelle, our conversation turned to a review of the course -- a 16-17 mile figure-8 loop made up of 80% single track through cactus and rock, and 20% rough fire roads. Michelle mentioned getting five flats during a previous ride... ahem, cactus needles... and recommended running tubeless tires.

Tubeless tires? I had a vague idea of what they were and how they worked, but had no experience with tubeless. (I do have experience with flats, though, and the possibility of getting five freaking flats during a race in the desert did not bode well.)

I planned to pick up my bike from FairWheel Bikes after we finished our coffee -- so gave them a call to see what could be done about converting my tires to tubeless. I knew it was a long shot... it was last minute and they were likely busy... but I thought it was worth asking about.

Steven in the service department at FairWheel Bikes was so incredibly nice and agreed with the girls that I should be running tubeless tires on the Willow Springs terrain. ("Probably something you don't think of the Northeast, but I'd definitely recommended it here.")  Steven explained that not all rims are tubeless-ready, but he'd look at what I had and do what he could. True to his word, with a Stans No-Tubes Conversion Kit, he was able to get it done, and I was able to pick up my bike Friday morning before our pre-ride. Good to go.

And yes, I did get some cactus in my tires, but not one flat. Kinda funky how that works.