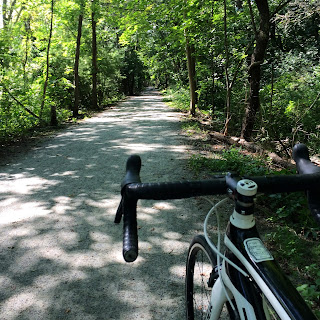 I haven't been on a Cyclopath ride in several weeks, and was running a half hour late on Saturday for the 7 am start. (Will needed a ride to the football fields at 7:30.) Still, getting a 30 minute late start didn't really amount to much, as I caught up to Donna en route to Boxford about 45 minutes later.

Hitting grooved pavement on Route 97 in Wenham, (scheduled to be paved next week), I took a shortcut to hop on the Wenham rail trail towards Topsfield. Apparently, Donna fell behind the rest of the gang and opted to do the same thing, while the others apparently stayed on Rt 97. (Eesh. Why? Rough.)

Expecting to find the gang waiting for her in Topsfield, and not finding anyone when she arrived, Donna realized the others stayed on 97 and didn't know she took a different route -- and were likely waiting for her as it's a no-drop ride. So, while she stayed in Topsfield, I turned up 97 for a few miles to find them -- so typically Cyclopath. We always get lost when heading to Boxford!

After breakfast at the Boxford Community Store, we headed back down the Topsfield-Wenham trail to avoid the rough pavement home. Since no one had taken the trail all the way from Topsfield to Danvers, it was a bit of a mystery where we'd eventually end up. Fun ride! The trail took us to Danvers Center -- where we then hopped on Routes 62 and a busy Rt 114 back to Salem. (Not my favorite roads to ride on.)

Pace was slower than slow, but the breakfast and people made it fun -- and I loved the trail through the Danvers swamp and the mystery of wondering where we'd end up. Fun!! I love those kinds of rides.