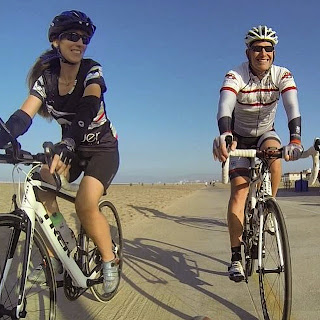 It was both shocking and sad to learn that Navy Commander Kevin Childre died yesterday following injuries sustained in a cycling accident on Wednesday. It was Day 4 of the "Train of Pain" -- a 6 day bike ride from San Francisco to San Diego with Navy Cycling friends. I'm shocked by this devastating news.

It was a serious though not uncommon crash -- a collision with another rider -- one that many of us have had as cyclists. I received the heartbreaking news from our friend Christina, who sent me a message informing me of the accident earlier in the day. I was stunned. Sad.

Kevin was the driving force of the Undefeated EOD Bike Ride, raising hundreds of thousands of dollars for the EOD Warrior Foundation. Ironically, I'd just received an email from him letting me know that this year's EOD Ride was a go, and I'd been wondering if I'd be able to tackle those California hills by October. (Sigh.)  Kevin had a warm and engaging soul, kind, generous, and thoughtful. My heart goes out to his family and friends -- he was an extraordinary person. Fair winds and following seas, Kevin. Rest easy.