Just Rolling With It 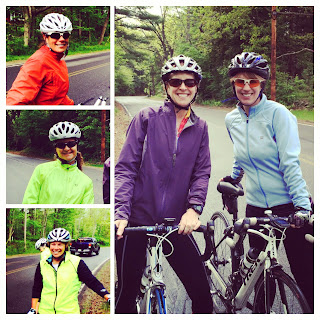 When I woke up this morning, I had a feeling my Cyclopath ride would be cancelled. I knew the chilly overcast skies, and the possibility of rain, was enough to keep our fair weather gang indoors, but I headed out anyway, just in case someone showed up. (Aaaand... no one did.) I waited a bit and rode to the Beverly-Salem bridge, thinking Ducky might be waiting there... but no Ducky. (Sigh.)

Already heading over the bridge, I considered turning around to head home, maybe looping The Willows and Marblehead on the way, but as I approached the light, I said to myself, "If the light changes, I'll keep going"... and it did. So I kept going -- not really sure where I was headed to.

Twenty minutes later, I heard a few text messages pinging from my back pocket, so I pulled over to see what was up. Jen El-Sharif had included me in a group text message the night before, planning an 80 mile ride today, and a few others were planning to join her. At the time, I was already committed to a breakfast ride, but at 7:30 a.m., I no longer had a plan.

So, I returned the text message and managed to make my way over from North Beverly to Bradley Palmer State Park to meet Jen, Amy, Lisa, and Lila. Since my original plan had been a breakfast ride with the Cyclopaths, I hadn't eaten anything before leaving the house, and was really low on energy. Thankfully, Lila knew it, and arrived at the park with food for me! She's just the best. (Thanks for the rescue, Lila!)

We headed north through Topsfield and Middleton, along quiet back roads towards New Hampshire. It was fun riding with the girls and it was a great route!! After a while, Lila and I split off from the others and headed back together, ending up on a dirt road and not really knowing our way back. Hahaha!!! Somehow, despite feeling a bit lost, we still managed to retrace our route back to Topsfield.

I ended up with 56 miles by the time I got home -- some of it slow and pokey in the morning, when I hadn't yet figured out where I was going. No speed records today. I also managed to get another flat in Marblehead, (third one), just two miles from home. They really need to clean the streets!