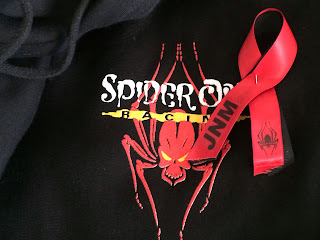 The last three days have been in the low to mid 20s, but I managed to get out for a ride each day. At this point, my threshold of not riding in temps under thirty degrees is shot. I just need to get out.

On Saturday, the Pedal to End Cancer, (originally planned as an indoor ride) headed outdoors instead. It was a bitter 27 degrees, but the sun was bright, making it feel a bit warmer. (Or maybe that was all in my head.) We headed up to Manchester for a 20 mile loop, and Shayne humored me by stopping for breakfast/lunch at the Beach Street Cafe. (Haha. So Cyclopath.) It was a cold one, but good to ride, and we raised some money for the American Cancer Society. (Thank you again, Nancy and Fred, for the donation!)

Sunday's ride was a tribute to fellow SpiderOne athlete John N. Matook -- who passed away very suddenly on Wednesday. Led by Brandi and Shayne, several of us made the ride to John's wake in Revere under gray skies and raw temps, but no snow, (originally in the forecast). Julie H. and I rode the round trip from Swampy, coming home in the dark -- which was actually quite a challenge when we couldn't see the potholes. I hope John would have smiled at our adventure.

Having gone out the last two days in the cold, I hadn't planned to ride today, (21 degrees and a repeat of yesterday), but I'd been nursing a caffeine-withdrawal headache since waking at 4 a.m., and thought a ride would help. (It didn't, really, but I'm glad I got out. March is a long month.)