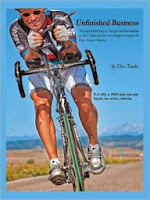 It's another bitter cold day today, (inching up into the 20's), and I'm not having the best week. I missed a few of my workouts this week but have been spending some time in the studio -- so at least I've been somewhat productive.

I also finished reading Unfinished Business. A blow-by-blow account of Ultra Cyclist Dex Tooke's Race Across America in 2011. It was Dex's second attempt at RAAM, (he DNF'd in 2010 after a time miscalculation), and his detailed account of his 2011 successful crossing is quite amazing. Dex and his wife/crew-chief Joni are joining Joan Deitchman's crew in June, and I'm thrilled to be spending time with both of them on our cross-country journey.

In addition to Dex and Joni, there are seven other crew members on the team -- three of us are Vanderkitten VIPs, including cyclists Lindsay King from Toronto and Kati Bak from Iowa. (Joan is also a VKVIP, so the kittens are well represented.) Also on board: Mike Deitchman, Crew Chief; Jeff Faillers, medic/mechanical; Brooke Alexander, message therapist/PT; and endurance athlete Ingrid Hillhouse. Joan is going to have a solid crew behind her.

It sounds like this year's RAAM women's race is going to be an exciting one. To date, seven women are racing in the under 50 category, (already the largest field of women ever, with the possibility of more entering), representing 5 countries. (Joan is representing home country Canada.) Also riding this year, (in the 50+ category) is 6-time winner Seana Hogan. It's going to be quite an adventure.