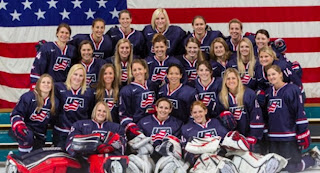 I don't watch a lot of television, (although I do sometimes catch a weather report), and didn't watch all of the Olympics while they aired. I tried. I really did. I caught a men's ski event where NBC showed two runs, followed by a 15 minute "human interest" story about one of the competitors, (really, foreshadowing his gold medal win), cut to 10 minutes of commercials before airing two more runs, and then cut back to ten more minutes of commercials. Good gravy. I saw a total of four skiers before I gave up.

I followed the competitions online and caught Olympic hockey fever while following Danvers native Meghan Duggan's twitter feed from Sochi. (Love her!) I'm disappointed the gold medal slipped out of the Americans' grasp today, but the US women played an amazing game, (and Mike DVR'd it so I could fast forward through the commercials). Unfortunately, the hockey gods were on Canada's side today. Congrats to Team USA and Team Canada -- an exciting game by both teams.