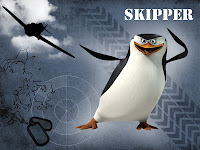 The bike naming ritual has begun, with several names floating around for my new Trek Domane. Cyclopath Drew traditionally names the new bikes in the fold, and bestowed 'Skye' on my Allez several years ago. It was a perfect fit. (I don't know how this custom came about -- I just go with it.) Tonight, Drew sent me several names she's been mulling over and I ran them by the boys. They liked a few of the suggestions -- but then, thinking of the black & white of my bike, countered with Skipper, Rico, Kowalski and Private. I didn't get it.

Chip then turned to YouTube, typed in keywords 'Penguin Madagascar Kaboom' and popped up a YouTube video for me. In two seconds he was in hysterics, laughing over Rico and Skipper, the penguins of Madagascar. A few minutes later, as he went off to bed, still giggling, I heard him say, "Just smile and wave, boys. Smile and wave". Too funny. It's looking like Skipper is the name of my new Trek.