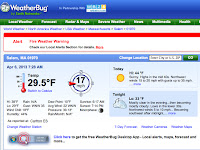 I was sooooo excited to get out on the road for our group ride... until I saw the temperature outside. 29 degrees?! C'mon... that's so unfair!

I'd been pressuring folks to ride all week, and knew a few would be waiting for me in Salem, so I bundled up and headed out! It was cold and windy, and my face froze the instant I started riding -- but kudos to the combination of Pactimo and UnderArmour baselayers and Pactimo Cascade jacket for keeping my core warm.

I met Ed and Sheldon in Salem, and Ducky on the Beverly-Salem bridge. (Laurie, Av, and Gail joined us for breakfast by car). We had ambitious plans to start, but as we headed out our plans became more conservative and we ended up at the Omelet Headquarters in Beverly. Not very far from the Salem start, but since I had started in Swampscott, I wasn't too disappointed. (To be truthful, I wouldn't have ridden today, as my threshold is 32 degrees.) After a warm breakfast, and saying goodbye to the others, I returned to Swampscott and ran into Ethan who was just passing my street. I turned around to join him for a ten mile loop of Marblehead. Quick pace. Loved it. At the end of the morning, I had 25 miles in the bank. Not too shabby for a sub-30 degree day... but it's going to take me some time to thaw out.