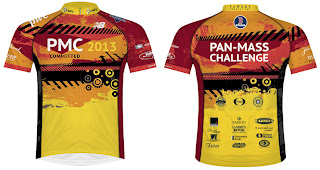 The design for this year's PMC jersey was unveiled today. There's been a mixed reaction from our cycling crew. Some like it, (I do) -- some don't. I remember not liking last year's jersey when I saw it online but found it was nice once I saw the actual shirt in August -- with one notable exception.

I don't care for the PMC slogan, "Commit. You'll figure it out.", because most of the time, people can't figure it out, and I have to explain it! Ugh. And being a (North Shore) Cyclopath, having the word "committed" branded boldly across the front of my chest did raise some eyebrows last year. (Cyclopath... committed... it sort of became a joke, which was unfortunate. "Dedicated" would have been a less loaded word.) At least this year the word "committed" is less in-your-face.

So, we have a red/orange/yellow color scheme this year... and I hear red goes with everything.