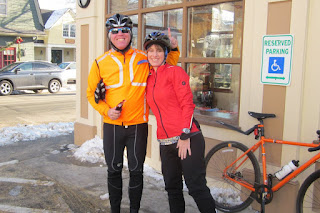 We had a sunny 32 degrees this morning as Ethan and I headed out to Beverly Farms for our first ride of the new year! Ethan arrived dressed in safety orange riding his orange fixie. (So much orange! I always wonder where the cyclo-guys get their fashion sense. Sam's electric blue spandex pants come to mind.)

I wore my new Pactimo Cascade jacket that Mike gave me for Christmas. It's a race cut jacket -- fits snug -- and doesn't leave much room for layering. I wore a Pactimo baselayer and Athleta running jersey beneath it and have to say I wasn't as warm as I am in the Gavia with an UnderArmour. (I was warm in the Cascade, but I'm toasty in the Gavia.) It could have been the windchill factor today... but right now the jury is still out on the Cascade. I'm a little disappointed, though it does look and feel fantastic.

Ethan and I looped out to Beverly Farms (which he pronounces without the 'r'), and stopped for tea and coffee at the DDs. Returning to ride the back roads at Prides Crossing after our coffee stop, we ran into a deer that was likely the cousin to the behemoth I saw at Thanksgiving. The wind was brisk, keeping the temperatures low, but the streets were relatively clear after last weekend's snow. A great ride!