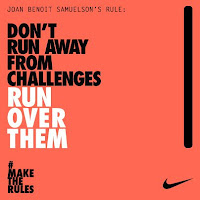 Will is in a bit of a funk today. His football team lost their 5th straight game last night while Chip's team likely made the playoffs. It's not always easy when one boy has more success than the other. I tend to become a walking Nike ad, trying to spin their negative thoughts into positive inspiration. Of course they think I'm crazy.

I'm feeling sore today after working intervals with Christine on Monday. She hit all the muscles the bike doesn't touch. I hurt all over. Guess I need to start quoting those Nike ads to myself.

And speaking of Nike... I just learned that they dropped Lance Armstrong from their stable of endorsements, claiming Armstrong "misled" Nike for more than a decade. Really? In a sport rife with doping, Nike was in the dark?. Ummm... o.k... whatever. I'm not defending Armstrong by any means, but we all know there wasn't any juice left to squeeze out of that endorsement deal... the guy retired 2 years ago. But claiming the moral high ground here, while standing behind other embattled athletes including Kobe Bryant, Ben Roethlisberger, Marion Jones and Alex Rodriguez (who admitted to taking PEDs), seems rather bogus, don't you think?

I wrote this post when Armstrong announced that he wasn't planning to fight the USADA charges against him. Absent of actual proof that he cheated, I felt he deserved the benefit of the doubt. (Especially since Nike supported other athletes with questionable morals.) Armstrong has since admitted to doping. Another hero bites the dust.