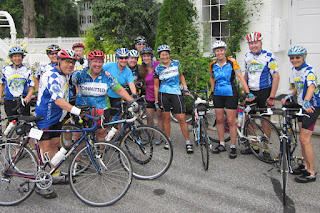 It was great to get back on the bike last Saturday for a Cyclopath ride -- my first group ride since the crash! (Will chose to sleep in late after a week of football practice. I guess he needed the rest.) Thirteen of us headed out to Boxford for breakfast at Wayne's, (AKA The Boxford Community Store.) It was a fun morning with many laughs.

After breakfast, the gang decided to loop out to Bradley Palmer State Park. I chose instead to head back to Swampscott, hoping to get back early so Chip and I could go kayaking -- or in Chip's case, Stand-Up Paddleboarding. Probably our last weekend to get out on the water.

Cyclopath Margie and I missed a turn in Topsfield and came across the Topsfield Linear Common trail that took us out to the Wenham Rail Trail. Continuing on, we discovered that it ended at the bottom of the 97 hill. Being lazy and not wanting to climb the hill, we ventured further on to the Danvers Rail Trail, which took us through a swamp conservation area along a rough trail. The ground became rougher and rougher under our skinny road tires the further we ventured, until eventually we had to get off our bikes to walk, about 150 yards. The trail ended on Rt 35 in Danvers, which we took for a few miles until it intersected with 62. As we rode into Beverly near the Beverly train depot, we came across our fellow Cyclopaths who had ventured out to Bradley Palmer State Park, in the end finishing at the same time, with similar mileage, as Margie and I. Weird how that happens...