Wow.... where to start? This year's PMC was amazing, from the wonderful support I received from my family and friends, my Cyclopath teammates, and all of you so generously willing to support me in this cause -- you touched my heart. You knew how much this meant to me and you came through for me again. Thank you!

I still have many thank you notes to send... I'm writing them now... meanwhile, here is my PMC Wrap-Up for 2006. (I apologize for the length!) Thanks again for everything! With love, Tam


Saturday, August 5th
The day started early, with ten Cyclopaths riding out of Wellesley. (Others were starting in Sturbridge.) We once again gathered as a group to start together, but quickly separated as the ride got underway. It's very easy to get caught up in the flow of riders and lose each other. My plan was to ride with Sheldon and Donna, but as we left Wellesley and on into Dover, they dropped further back as the tide of cyclists carried me forward.

First stop: Wrentham
I spent the first leg of the journey with Cyclopath-Drew, which was quite fun, and then regrouped with Donna and Sheldon at the first waterstop in Wrentham. The waterstop had a "Jimmy Buffet" theme, with Margaritaville and Cheeseburger in Paradise playing on the sound system, and volunteers dressed as parrot heads! Like last year, I found a "Happy Birthday" sign waiting for my arrival! Fun!! 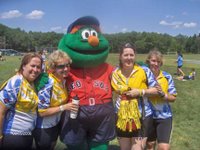 The day was amazing. We couldn't have asked for better weather. After 100 degree days just three days before, we were really fortunate to have clear skies and low humidity. The morning passed quickly and we arrived at the next waterstop shortly after 11 am. I grabbed a bite to eat, ran into some friends, and then briefly saw Michael K, Drew, Lisa and Brian (who started in Sturbridge) before they continued on. We had a smaller Cyclopath lunch gathering than last year, but it was fun just the same. (Photo: Donna, Lisa, Wally the Green Monster, Drew and Me.)

Lakeville
Reenergized, rested, and with food in our stomachs, the ride to Lakeville was a breeze. The three of us arrived just a little more than an hour after leaving the last stop. I ran into Drew and Lisa, who were heading out -- and Michael, who joined us for the rest of the ride. The waterstop was crowded with cyclists and volunteers, and I wondered to myself how I would find my father-in-law, Fred, in the crowd. Just as soon as I asked myself that question, I spotted him filling water bottles with Powerade and water!! (It's amazing how much he resembles Mike.) It was great to see him! I introduced Fred to the Cyclopaths who were currently in Lakeville, but didn't stay too long. We still had 25 miles to go. 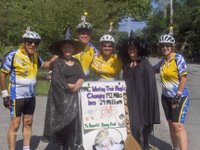 Next Stop: Wareham
Somewhere along the route we found the "Over the Hill Cheerleaders", (in photo, right), dressed as witches! The music from Harry Potter was playing in the background. It is such a treat to see them, and one commented to Sheldon, "You're still riding?!" It was Sheldon's 22nd PMC.

We got into Wareham at 3:30 and I quickly found my sister, Donna. One of the Cyclopaths commented how I "had family working at every stop along the way!" (Ha! Not yet, but I'm working on it!) Wareham is still my favorite stop -- it's far less crowded than the others stops (10 miles from the end, many riders skip it and ride straight to Bourne.) Loved seeing Donna! Again, we didn't stay too long and got back on the road fairly quickly. 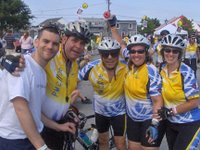 Final Leg: Bourne
Leaving Wareham to Bourne I made the comment that the mileage was simply "two loops around the neck", which seemed to please Sheldon. The trip through Wareham, Onset and Bourne went quickly! I spotted Councilor Mike's wife, Deborah, at one point (Onset?) and pulled over to say "hello". She informed me that Mike had made it to Bourne. (Hooray!) At 4:30 Donna, Sheldon, Mike K and I rode in to Bourne! Husband-Michael (and Mike Kelleher's son, also named Michael) were there to celebrate! It was a great finish. Photo: Mike Kelleher Jr. and Sr., Sheldon, Donna and Me at the finish!

I quickly showered, changed, and headed to the massage tent before doing anything else. (My neck and shoulders were sore.) After a massage, I grabbed something to eat with Mike before he had to leave. He'd worked on luggage detail all morning and was tired, but stuck around for a while. (What a sweetie.) At 6:30 the Cyclopaths gathered for the traditional group photo: This year there were 21 of us. (Ed is missing from the photo.) What a great group!!,

Two hours later I was in bed. A long, but amazing, day.

I went to bed early -- and woke at 2 a.m., unable to fall back to sleep. At 4:15, I pulled my bag out to the hallway, as the dorm was coming alive, and started getting ready for the big day. I felt pretty good -- no aches, no pains. I was out the door by 4:45 and quickly loaded my bag onto the luggage truck headed for Provincetown. As I entered the breakfast tent, I spotted Bruce and we grabbed a bite to eat. (I also briefly saw Lynda in the morning.)

Crossing the Bourne Bridge early in the morning, with muscles not quite warmed up.... wow, that was tough. I made it over the bridge, though, and felt pretty good about it. As I coasted to the bottom of the hill and turned the corner, I read "Happy Birthday Tammy!" written on the road in chalk. Donna and Drew... what pals.

It was early in the morning and the sun wasn't even up yet. We rode along the Cape Cod Canal for several miles until reaching the Sagamore Bridge, and then started the trek across the Cape. The roads were lined with signs, balloons, and occasionally people, cheering us on. It was a nice way to start the day.

The mood of the day shifted from excitement to camaraderie, as cyclists said "hello", greeting you by name more often than simply shouting, "on your left!" It was nice. The sun began to rise over the canal.

First Stop: Barnstable
Probably the most disorganized waterstop of the PMC. I entered the site and couldn't find water or Powerade anywhere. I walked around in circles (not easy in cycling shoes), asked another cyclist (who vaguely pointed to the medical tent), asked two volunteers (neither had a clue)... and finally gave up. I figured I had enough water to get me to the lunch stop or I would stop at a store. What a pain!

The Cape Cod Sea Camps
Not long after leaving the water stop, maybe ten or 12 miles, I began spotting signs on the side of the road announcing "The Hedge". ( "3 miles until The Hedge"... "2 miles until The Hedge", etc.... until finally, I reached it. Hundreds of kids, three or four deep, lining a 100 foot hedge at the Cape Cod Sea Camps, cheering, shouting, screaming their lungs out, clapping, ringing bells and blowing horns.... the loudest cheer you could possibly imagine as you ride by. All of the kids were wild with excitement. What a thrill!

Next Stop: Brewster
I reached lunch about a mile later and got off my bike for a while. I hadn't seen any Cyclopaths since the ride began, and had expected some of them to have passed me by now. (Of the Cyclopaths riding Day 2, I am the slowest.) As I was getting a popsicle I noticed Cyclopath-Jeff Brand heading towards the exit. I wasn't too far behind him. I stayed at the Brewster stop for just 5 minutes after he left and continued on.

The ride leading out of Brewster took us on the Cape Cod Rail Trail, very easy terrain, though rough spots here and there. I noticed my average at that time was hovering 16 mph which is good for me. The rolling hills in the morning, while sometimes an effort to climb, were great for the downhills (and boosting my average). (Photo: Another roadside sign from Donna & Co., wishing me a Happy Birthday!)

I made it to Wellfleet around 11 am, feeling great and excited for the finish. I finally began running into Cyclopaths -- "Mojito Dave (Henry) and Little Dave (Fionda) -- there are many "Daves" and "Mikes" in our group -- and saw Lynda from a distance. I also ran into Julie Grossman, an acquaintance from Marblehead who owns the deli we frequent. I stayed in Wellfleet for ten or 15 minutes and then hit the road again.

Hills? I say their Mountains!
Ten miles into the home stretch, the hills started getting bigger. And bigger. My muscles were getting fatigued and my hands were numb. I made it up one hill after another, slowly grinding along in my granny gear.

I slowly trudged up Heartbreak Hill and caught NECN taping the "Over the Hill Cheerleaders" for their newscast as I was riding by. (Loved seeing them again. Such great ladies.)

Route 6A: Yuck
What a crappy road to ride on -- fast cars, no trees, long hills ... Dave Henry passed by me with his Funcheck Crew and gave a cheerful hello; then it was Lisa and Brian sweeping by in a paceline of riders; followed by Bruce and Don Ross.

The Last Hill? 5 Miles to go...
I thought I had one big hill left... and I made it up that last hill slowly, relieved that it was the last one.... until... damn! Another hill!! My muscles started to rebel until I saw a sign up ahead on a tree... and as I approached, I saw that it was a photo of Sue, (courtesy of Donna.) Double damn! I couldn't get off the bike now! I took a deeeeep breath and gave it all the energy I had to get up that hill. That last hill.

The final miles
So now I was tired... but I was feeling emotional too. I knew I'd made it, and tears welled in my eyes. I only had a few miles to go. It's flat. The scenery is gorgeous. Sand dunes everywhere, rose of sharon, peeks of the ocean, a steady breeze... I slowed down and tried to take it all in. So many emotions. Such a beautiful day.

My friend Julie came up behind me to ride the last quarter mile to the finish. What were the odds? With 2,500 riders finishing in Provincetown, how ironic is it that I would finish with someone from Marblehead (not with the Cyclopaths)?!

Provincetown Finish
I made it! It felt so good. And what a reception I had! As Julie and I approached the finish, I heard Cyclopaths Donna and Drew, Mike and Ellen and Karen yell out to me. (They didn't ride on Sunday). After congratulatory hugs, and pictures, I officially checked in with skirt-wearing Michael Kelleher (who was volunteering at the finish) -- then showered and joined the rest of the Cyclopaths in Provincetown to celebrate.

Pan Mass Challenge 2006 was so amazing -- what a weekend and what a ride. Thank you again for your support. We raised nearly $6,000 for The Jimmy Fund this year, with donations still coming in. Thank you!!!